Today is December 23rd, which might not seem like that big a deal, until you find out that it is also the Professor's BIRTHDAY! I'm currently in NC visiting- and today is when I get to find out if the ONE thing he asked for turned out ok. You see, when I asked the Prof what kind of cake he would like for his birthday, he hesitantly explained that his favorite kind of cake was a little odd and difficult to make and that I was under no obligation whatsoever to try to make it. My response? "Challenge accepted." I didn't say that out loud. I let him think I was too intimidated by this cake to try it. That way, I could do some research, master the technique and then wow him on his birthday by presenting him with exactly the thing he thought was impossible to have. (Girlfriend of the Year, am I right?) What kind of cake did he request? Well, you probably figured it out by the title of this post: fruitcake. Yup. My dude likes weird British food.

In the weeks after that initial conversation, he told me about how a TRUE fruitcake is steamed, not baked, I was intrigued, and I'll admit, a little perplexed. Intimidated? Yes, but only due to the lack of information online. Isn't EVERYTHING online these days? Why can't I find a simple steamed fruitcake recipe if everything on the planet is online? (The truth is that there's more junk online than anything else, so it's actually getting more and more difficult to weed through all the junk to find what you're actually looking for. That's my opinion, anyway.) Most recipes I found that involved boiling or steaming the cake weren't what the Professor had described. He said it was made using a type of Bundt pan. He said you cooked it on the stove, not in the oven. He said it was delicious. His MOM used to make it for him. (No pressure there.) A visit to the kitchen supply store didn't help much as the employees mostly looked at me cross-eyed when I asked for a special type of covered Bundt pan for making fruitcake.

Anyway, after all the research, I was left with no choice but to go rogue. I started with the Bundt pan I'd found at the kitchen store. It was a little guy- about six inches tall and about five inches wide. The key to this pan, though, is that it came with a lid. No joke: 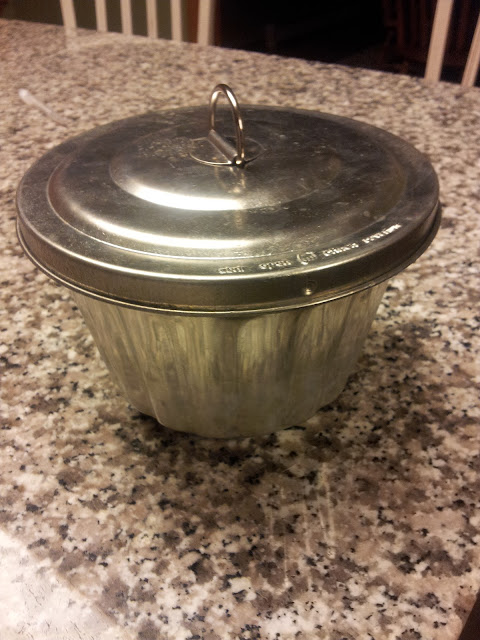 I still couldn't figure out, based on my research if this was to go in the oven with a dish of steaming water, or if it was dropped into a large saucepan on the stovetop. I had NO CLUE. I abandoned my search to find out about how the equipment was to be used and started researching recipes. I found BILLIONS!!! And here's the thing: every recipe was vastly different from the one before it. Major variations in the ingredients in terms of type, proportion and overall amount. One recipe was clearly designed to feed fruitcake to the masses, because it called for multiple POUNDS of dried fruit. Seriously.

In addition to there being some serious variation, any recipe I found that made mention of "steaming" tended to be in grams, which I of course found irritating. I know that "true bakers" weigh everything rather than measure it, but I don't have a digital scale at home, and I was already 20 bucks in with the special Bundt pan. Purchasing a digital scale for ONE recipe seemed a little over-the-top.

Finally, the most frustrating thing was that every single recipe that referenced the method of "steaming" the cake, didn't explain at all what that meant, exactly. I'd read a few recipes where a crock pot was employed; others where there was a tray of water placed in the bottom of the oven, and then there was the Professor's reference to cooking it on the stovetop. AARRRGGGHHHH!!!! What to do?!?!?!

As I mentioned, I eventually decided to just go rogue. I threw caution to the wind and just went for it. I started with a recipe I found online, but I made a few adjustments to it. First, I doubled ALL of the ingredients. I just couldn't understand how only half a cup of flour was going to make a cake- even if it WAS going to be made in my tiny (but very special) Bundt pan. It made no sense to me. So.... DOUBLE EVERYTHING! Also, rather than scour the market for all the special dried fruits called for, I just bought those bags of mixed dried berries. Additionally, I had a package of dried apricots, but then I read online that apricots tend to overwhelm all the other fruitcake fruits, and this particular fruitcake aficionado recommended using them sparingly, if at all. I opted to leave them out.

I decided to try the stovetop method since the Professor was so adamant that the stovetop steaming method was the "true" fruitcake cooking method. I found a pot large enough for my Bundt pan and filled it with water. While waiting for the water to boil, I mixed the batter. Here's the recipe I used:

(All the measurements above are mine, not the original recipe.)

The day before I planned to bake the cake, I soaked the berries in the rum and left them at room temperature for about 24 hours. Some recipes recommend soaking for 72 hours. Whatevs. I got my berries good and drunk in 24.

To make the batter, I just creamed the butter and sugar together, then added the eggs, one at a time. Meanwhile I sifted/whisked the dry ingredients together in a separate bowl. I added the dry mix to the butter/sugar/eggs mixture in three batches, alternating with the molasses and the milk. Finally, I stirred in the soaked fruit (reserving the liquid) and the nuts.

Next, I greased and floured my Bundt pan. A lot of recipes (including the one I was using) recommended lining the pan with parchment paper. I noticed that those recipes also used loaf pans, but with my special Bundt pan, I knew that would be a nightmare. I chose to use the ghetto baking spray that is both butter and flour. I filled the pan with batter, closed the lid tightly and lowered it into the boiling water. I put the lid on the saucepan and sat patiently for two hours while the cake "steamed."

Here's where I want to explain things as clearly as possible. You see, no one online wanted to tell me how to steam the stinkin' fruit cake. If it was a recipe that called for steaming, they all simply said things like, "Steam for 2 hours." NO information beyond that! I had so many questions!

1.) Am I using the right kind of pot?
2.) Do I leave the lid on the pot?
3.) Do I need the Bundt pan to be submerged in the boiling water, or will a small amount at the bottom do?
4.) How long do I leave the cake in there? (Some recipes said 2 hours, others said 4. Kind of a big discrepancy.)
5.) WILL THE BUNDT PAN EXPLODE AND LEAVE FRUITCAKE BATTER SPLATTERED ALL OVER THE KITCHEN LIKE SOME FREAKISH BAKING CRIME SCENE?!?!?!?!

These are important questions, right? So, I will answer them for you based on my experimental steaming method:

1.) Since my Bundt pan was so small, I was able to use a large pot, kind of like the type you'd use to cook a whole bunch of spaghetti, or maybe make soup with.
2.) I left the lid on for the entire cooking time, taking it off only to add more water.
3.) I filled the pot up about half-way with water and when it got down to about 1/3 full I would add a few cups of hot water. This happened about every 30-40 minutes.
4.) I cooked it for two hours exactly, then pulled it out to check on it. A toothpick inserted into the cake came out clean, so I called it done.
5.) In my experience, no.

And the result of my rogue fruitcake baking? Well, it was this lovely gem: 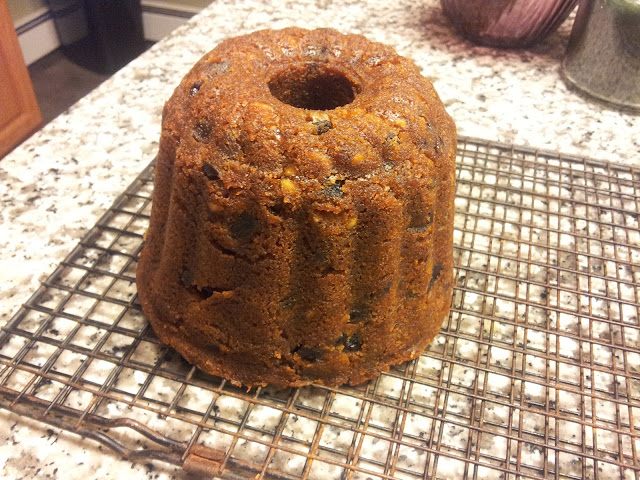 I decided NOT to "feed" the fruitcake with rum or brandy, as nearly every recipe recommends. This is for a couple of reasons. Frist of all, the minimum time you need after sprinkling the liquor onto the cake and consumption is a week to 10 days. I didn't want to risk the alcohol not being mellowed enough by the time we ate the cake. Also, with all the rum in the berries, I think the flavor is probably strong enough.

Today, I will find out how it tastes, but I have to tell you that when I pulled the top off the Bundt pan, the smell was absolutely divine. It smelled sweet and buttery, and not at all like the batter I'd poured in there two hours prior. The batter looked pretty gross, and smelled even worse. I think it's the molasses that make it stink like that. It was also a little lumpy-looking. It never had the perfectly smooth consistency I'm used to in cake batters. But I suppose all of that is irrelevant, since the resulting cake looked and smelled perfect!

So there you have it: adventures in fruitcake baking. Has anyone else attempted this type of cake, specifically the kind steamed on the stove top? Is it really that much more moist than a cake baked in the oven? Leave a comment, please!
Posted by Renée T. Habashy at 7:52 AM

Email ThisBlogThis!Share to TwitterShare to FacebookShare to Pinterest
Labels: Cooking

Holy cow, what an endeavor! I really don't like fruitcake except for one type made by a family friend years ago. The nuts were left whole and the candied fruits were more like what you did instead of those things that look like diced jellybeans. Let us know how the cake came out, it looks yummy! I've never made one myself.

We'll be tasting it later today, so I'll let you know! :)

The Professor's report: AMAZING! The butter pecan ice cream was quite the scrumptious addition...and your homemade caramel sauce made it a treat like no other. Babe, it is truly the world's best fruitcake! XOXO :-)

Aw, thanks, babe! I'm so glad you liked it! Now, let's stop being sappy all over the interwebs. People might lose their Christmas pudding if we're not careful. ;)

In case you couldn't tell from "The Professor's report" above, the fruitcake was a huge hit! I made the homemade caramel sauce and bought a pint of butter pecan ice cream to go with it. It was scrumptious. The fruitcake was dense, but very moist and quite delicious. It was nothing like the candied-fruit monstrosities that you think of when you hear the words "fruit cake." You can definitely bake the recipe in this post if you don't feel like steaming, so give it a try. And don't forget the caramel sauce. It really does make all the difference.