How to Host a Spa Slumber Party

When the Professor's daughter asked if I would host a spa slumber party for her 8th birthday party, I was happy to oblige. I have a tendency to over-plan, over-spend and generally over-do things like this, but this time I decided I was going to exercise restraint and try to make it fabulous on the cheap.

In searching through Pinterest, I was surprised at how few parties like this were pinned. Most of what I found online was geared towards hiring someone who brings everything in for you and costs upwards of $500-$600 for the party OR the most basic info like how to create a label template for making your own bubble bath or something.

In the end, I just decided to do it all myself and I'm very pleased with how it turned out. Originally, we planned on have four girls including the birthday girl. We wanted it to be manageable and modest. I figured with such a small number of girls, I could really go all-out and still not spend a fortune. And I succeeded!

To start, I knew each girl needed a spa robe, so with my 40% off coupon, I headed off to Joann Fabrics. Unfortunately, there wasn't any terry-cloth, but I made do with some bright pink fleece. I made these simple robes using a one-cut method. In other words, I cut the entire robe in one piece and then simply sewed up the sideseams to finish it off. I got a little fancy by adding the loops on the side for the waist ties, but other than that, I kept it very simple. In total, these robes cost $35.97 in fabric and an hour of my time. Literally- it took one hour to cut and sew all four of them- that's how simple they are. 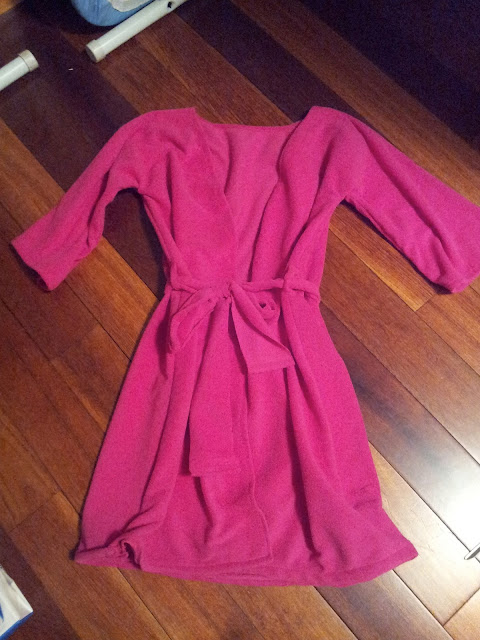 Once the robes were completed, I was able to focus on creating their spa bags. The way I saw it, each girl needed a spa bag of items that she would use at the party that was separate from her spa goodie bag, which was her take-home party favor.

The spa bag included a robe, a pair of flip flops, a sleep mask, a stretchy headband and a small towel. Believe it or not, everything I needed, I found at the DOLLAR STORE!!! And the best part was that everything except the towel was the same shade of bubble gum pink that I used to make the robes! 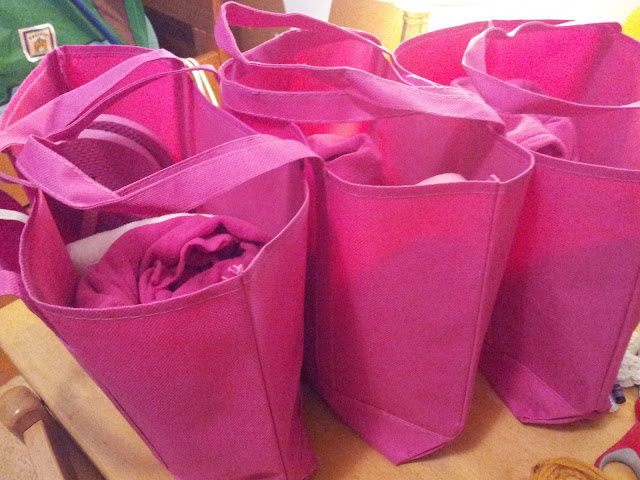 As each girl arrived, she was given her spa bag (that had her name written on it). We started with mani/pedis, but before their nails were painted, they were given some creativity with decorating their flip flops. Ribbons, glittery stick-ons, and more ribbons were in abundance. The girls' creativity came out in spades and they each ended up with some seriously fabulous flip flops: 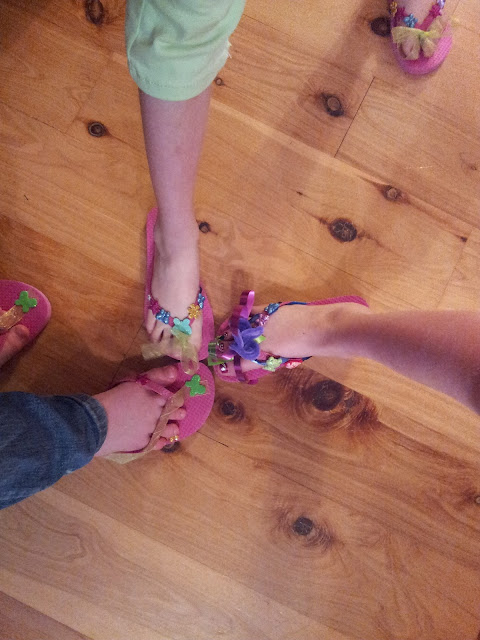 After mani/pedi time, we took a break to eat dinner and have cup cakes. Not long after that, it was time to change into swimsuits and spa robes. They used their pink headbands to hold back their hair so I could smear a strawberry-scented mud mask (that I brought from home) on their faces. Cucumbers covered their eyes for the few, brief moments of "relaxing." Finally, they all hopped into the Professor's jacuzzi tub complete with bubble bath and, of course, a chance to wash the mud off their faces. They loved every minute of it and I think they all felt very pampered. It was fun for me to plan as well.

I mentioned their spa party favor goodie bags, so I have to show those as well, or at least what went into them: 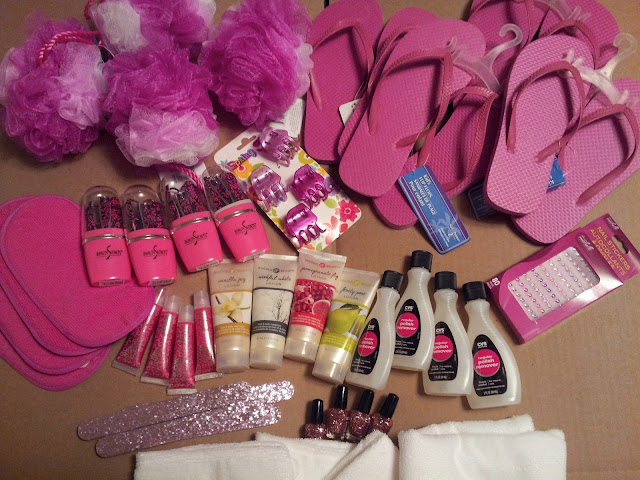 What's pictured above isn't a complete photo, but you get the idea. The flip flops, sleep masks and head towels (at the bottom of the photo) all went into their spa bags. The rest was in their party favor goodie bag and it included:

Most of what I purchased came from the Dollar Tree, but a few things were purchased at Sally Beauty Supply from the clearance section. I also threw some candy and glow-in-the-dark rings and bracelets in there as well, but I didn't take a picture of them. Grand total for all the bags and their contents was about $48, so that combined with the cost of making the robes came to a total of $83.97 or around $21 for each girl. Not too shabby, if you ask me! I think I got a lot of bang for my buck since each girl went home with a boatload of goodies including her own spa robe!

I know that as the Professor's daughter gets older, there will be even more spa-parties and hopefully actual trips to the spa in our future! And fortunately I know how to make spa robes on the cheap!

Have a great day, everyone and thanks for reading!
Posted by Renée T. Habashy at 8:49 AM

Yay! I am so glad the spa day birthday went great! I was thinking about you last night and wondering how it went. Miss you!

Did you use a pattern for the robe?

Julianne, I didn't use a pattern, actually. I folded the fabric in half and cut the shape of the robe on either side which created the sleeves. I cut around the neckline to make it a little more open. Then I just sewed the side seams from the hem straight up to the end of the sleeve and then finished all the edges.

Julianne, I didn't use a pattern, actually. I folded the fabric in half and cut the shape of the robe on either side which created the sleeves. I cut around the neckline to make it a little more open. Then I just sewed the side seams from the hem straight up to the end of the sleeve and then finished all the edges.

I absolutely love your Spa Party. I plan on using the same concept as you in regards to making robes. I just picked up some bed sheets from the Goodwill and plan on making some robes for 12 little girls. Although my material isn't fleece, it's still a pretty bright pink. I hope mines turn out just as lovely as yours.

Is there a pattern anywhere that demonstrate what you did for the robe?


This would make a great party favor

This slumber spa party is great. Really want to organize similar themed party for my daughter. Planning to have it at one of local New York event venues. It will be a fun to plan such a great party. Hope will be able to do amazing preparations for the day.

excuse I was wondering, how much does the robe cost?