So over the last couple of months, I've been wearing some pretty adorable stuff. I have not been posting very regularly (or at all) about it, mostly because I'm one of those girls who suddenly got an awesome boyfriend and decided to drop most of her nightly activities to Skype-date him. However, after take a break, I realized that I do miss the daily blogging.

Spending last Sunday afternoon with my bestie Beth and our friend Adele was what really made me want to blog again. We went to the SoWa Vintage Market and all felt a little offended by the term "vintage." They should just call a spade a spade- the term should be "flea market." Second-hand and vintage are actually NOT the same thing.

Anyway, that's just a little negative tangent- what I really loved about the day was seeing lots of cute outfits walking down the streets of Boston. Of course, the three of us looked pretty fabulous and I really regret not snapping a photo of us. We all had on simple outfits reflective of our individual style, but what we each had in common was a fun pop of color. For Adele and I, it was a brightly colored bag- hers in fuchsia, mine in bright coral. Beth's pop of color was an amazing bright orange scarf. None of us found much at the market, but it was still fun to shop together.

So... aside from my excursion this past Sunday, you may (or may not) be wondering what I've been up to these last couple of months. Aside from Skype-dating and jet-setting to North Carolina whenever possible, I've been busy at work. I've taken over the blog at Madeleine's Daughter and that's partly why I haven't been blogging here quite as much. Check it out when you have a minute! We feature a different bride of ours every week. I've also been spending a lot of time with my coworkers outside of work. It's one of the things that makes me truly appreciate my job. I genuinely enjoy spending time with my coworkers whenever possible. It seems like one of us always has a Living Social deal to spend or a Groupon that's about the expire. In addition, we've started a new weekly tradition of cooking dinner together on Saturday night when we get out of work. The menus have been so fun to create and of course the social aspect is a big draw every week. The girls bring their husbands, boyfriends, etc. and we all contribute to the cooking. A couple of weeks ago, nearly everyone showed up in a similar outfit- everyone was wearing stripes: 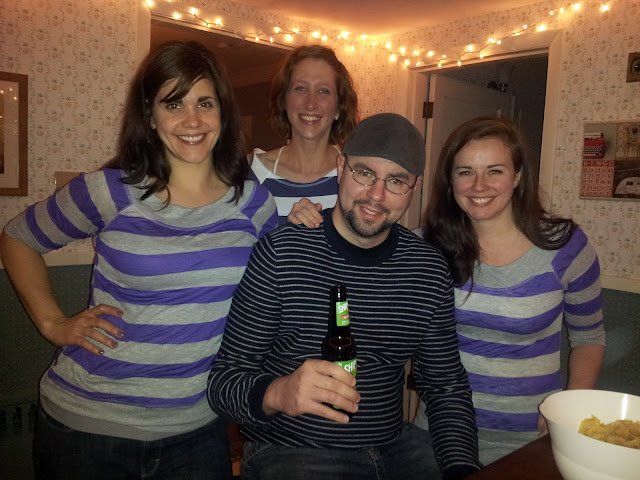 Not only did five people in attendance wear striped shirts (one isn't pictured here), but as you can see McKenzie and Juhree wore the exact same shirt! Regardless of outfit choice, we always have fun on Saturday night "Family Dinner" as we like to call it. Next week we're making Chicken Pot Pie. Yum!

So, aside from working, traveling, Skyping and family dinnering, I haven't been up to much. I wish I had lots of fun stories to share, but it's all a blur right now. I did have one very interesting (and pretty funny) thing happen to me last week. It all started with this hat: 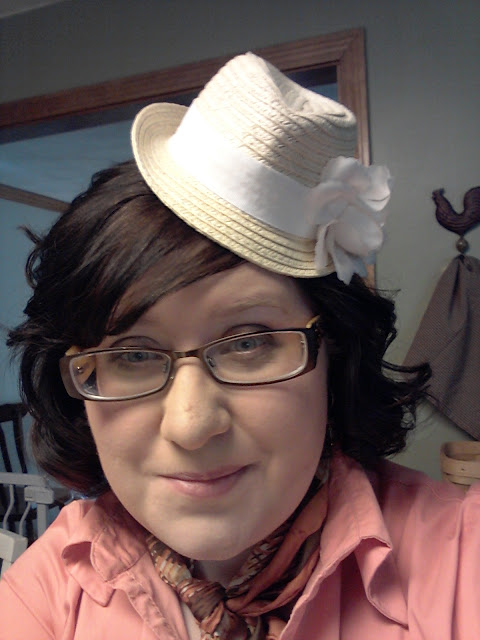 I wore it a few months ago (you can see the entire outfit here) and most people absolutely loved it. On this particular day, I wore it with a bright pink sun dress and adorable cream-colored flats. It was a super cute outfit. However, I remember seeing myself in the mirror at work and thinking, "I hope there aren't any angry or upset customers because if I have to talk to someone sternly, they might have trouble taking me seriously in this outfit." Well, sure enough, there was an angry MOB (mother of the bride) who decided to cause a little scene as her daughter was checking out after her alterations appointment. The issue itself is irrelevant- the MOB was irrationally angry and kept storming around the store causing a scene over it. I had to take my somewhat hard-ass stance and stand my ground. Customer service issues are never fun to deal with, especially when you have someone just snapping and making snide remarks at you. Anyway, the next day, the MOB called the store in an attempt to speak to someone higher up than me. She of course wanted the situation resolved in her favor, but even upon speaking with the store manager, nothing changed for her, really. And here's where it gets good: at the end of the conversation she said to the store manager, "You should know: I was NOT impressed with that girl in the STUPID LITTLE HAT!"

It's not as funny telling it here, but trust me when I say we've been laughing for a week over that remark. Yes, my hat is a little ridiculous and yes, this MOB probably didn't like having a serious conversation with me while I was wearing it, but ultimately I was calm, professional and did my best to take care of the bride. She may not have been impressed with me, but it was a pretty low blow to attack my personal style. I just wish I could plan it so that I was always wearing a stupid little hat whenever that MOB comes into the store!

Well, it's a gorgeous day here in New Hampshire and some of the ladies from work are heading over to my neck of the woods for an impromptu picnic! I've made a delicious Thai-style peanut noodle salad with fresh veggies, as well as some Asian-style orange chicken lettuce wraps. I may even whip up another cucumber salad, too. We'll finish off the lunch wish fresh watermelon and lemonade and some relaxing in the sun!

I hope you have a great day- leave a comment and let me know what YOU'VE been doing these last few months!
Posted by Renée T. Habashy at 9:09 AM 3 comments: