I Joined the Bandwagon!

Guys, after about a year of hemming and hawing over whether or not to take the plunge, I did it. I became an Instant Pot owner. It arrived on Sunday and I've used it three times already to great success. And what would this lifestyle blog be if I didn't share my experiences with the Instant Pot?!? 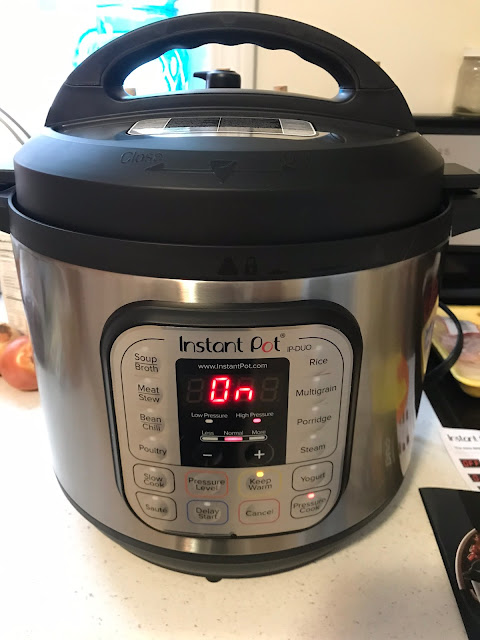 Buyer Beware: the 8-quart is MASSIVE.

Sam knew that I was thinking about getting one and Mr. Smarty Pants got up early on Black Friday and starting hunting the sales online. He found the 8-quart version on Amazon for more than 1/2 off. He ordered it and with Prime shipping, it arrived two days later.

I admit, I was a bit skeptical. I thought that the Instant Pot was just a glorified slow cooker. And I'm not a huge fan of slow cookers. I only use mine once in a while for very specific dishes. I don't love slow cookers because I'm not a fan of:

One of the most delightfully surprising things about the Instant Pot was that the taste and texture of the food you cook is NOTHING like the food cooked in a crock pot or slow cooker. Meat is moist and flavorful, veggies, pasta, etc. is all cooked to perfection. And the FLAVOR!!!!

Ok, I'll break down the first three things I made in the IP for you.

First up, was chicken wings. I'd heard these were amazing. I bought a dozen and seasoned them with salt, pepper, cayenne, paprika, garlic powder and onion powder. After seasoning them to my own taste, I pretty much followed this recipe. Even with pre-heating and pressure-release time, PLUS ten or so minutes under the broiler in my oven, this recipe was still significantly faster than cooking the wings in the oven. And there's no oil! They were moderately crispy, not nearly as crispy as I like, but I'm pretty sure the only way to achieve supreme crispiness is to fry the wings and I'm so not going down that road. So, for at-home wings, these were a solid 9/10. I tossed a little Frank's hot sauce on mine for an added kick and Sam and I had a perfect little lunch. 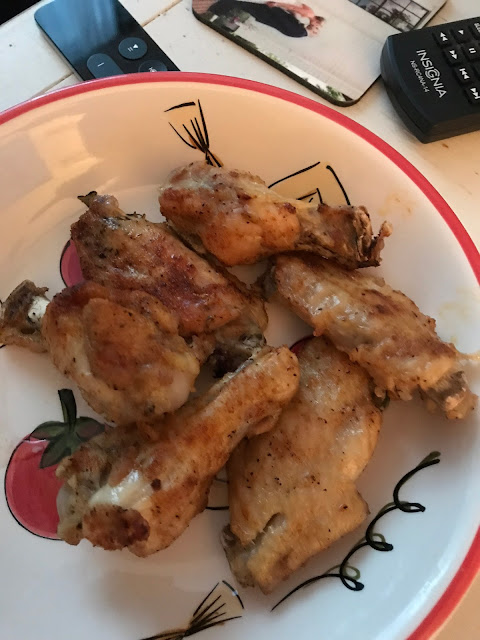 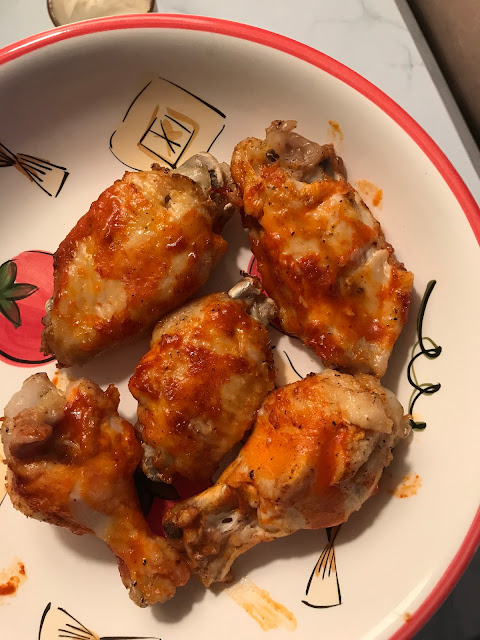 Mine- gotta have Frank's.


Next, I tried this Spaghetti Bolognese recipe. Things I found appealing about this recipe:

This recipe is a SOLID 10/10. The pasta cooks in the combination of the beef broth and the fire roasted tomatoes. The mirepoix prep is the most time-consuming, involved step in the entire recipe. Which is to say a monkey could do it. 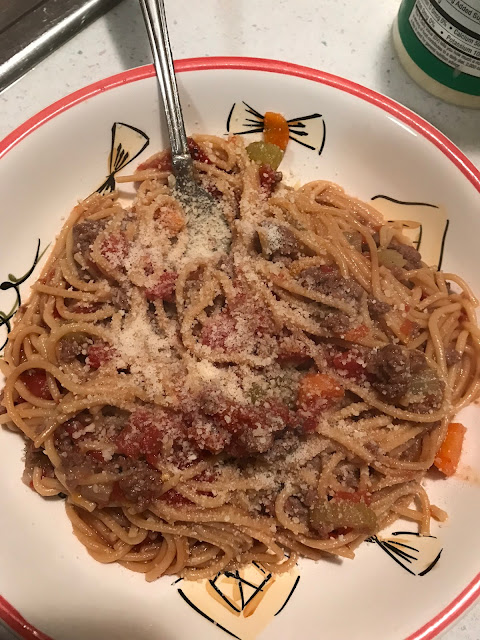 This dish made a perfect dinner for us and there was enough leftover for both of us to bring a tupperware to work for lunch the next TWO days. It made a LOT of food.

Something they don't tell you about the IP: There's a pre-heating phase AND a pressure-release phase. So, when a recipe says "cook for 7 minutes on high pressure," that doesn't mean you're eating in 7 minutes. The IP has to pre-heat and build up the pressure to cook the food. Then there's the very brief cooking time, and then the IP has to release the pressure, which you can do manually in about 5 minutes, or naturally in about 10. So, a 7- minute cook-time recipe actually takes closer to 25-30ish minutes depending on how long it takes to pre-heat/build pressure. The more food in the pot, the longer it takes. Still, taking into account the pre-heating, cooking and pressure releasing times, the depth of flavor this dish achieves is borderline magical. A traditional bolognese would take around 2 hours worth of simmering and still might not be this delicious. And in the process the mirepoix veggies would turn to mush. Another benefit? You don't have to dirty a second pot to boil the pasta.

Something else they don't tell you about the IP: Almost immediately after you turn on the machine, you begin to smell the enticing aroma of whatever you are cooking. It's pure delight.

The next day, Sam and I both had to work late-ish, so when I got home, it was basically dinner time. I hadn't planned a meal, but we had some leftover pork chops in the fridge. I pulled out some brown rice and decided to try the IP out and see if I could make perfect brown rice in under 30 minutes. That seems like a miracle, but that's kind of what pressure cookers are made for, right?

I used a method I found online that was very simple but produced a fully cooked rice with a soft but not mushy texture. It was light and fluffy and took less than half the time it normally does on the stove top.

High pressure setting for 15 minutes, followed by natural pressure release. I seasoned after cooking with salt, pepper and a pat of butter (because butter, duh). It was the perfect side dish for our leftover pork chops. We eat a lot of brown rice, so I'm certain we'll be using the IP to make it from now on. Why wait almost an hour when you don't have to, am I right?

Friends have been sharing their favorite IP recipes and now that I've had such great success with the first few I've tried, I'm certain I'll be using it on the reg and tasting all their favorite dishes.

Do you have an Instant Pot? What are your go-to recipes? What do you love/hate about it? Leave a comment and let me know!
Posted by Renée T. Habashy at 8:22 AM